If you’ve ever shot-gunned the window seat on a flight into or out of Sydney’s Kingsford Smith Airport, chances are you will have seen Brighton-Le-Sands. If not, on your next flight to or from Sydney, look out the window on take off or landing.

I have always been curious about the name of this suburb. Anything with two hyphens and sounding a little French and fancy must have an interesting story, right?

Well, not really. As it turns out, the area was originally named after the famous seaside resort Brighton in England. In the late 1880s, it was the hot spot for entertainment and vacations – there was a tramway from Rockdale to Lady Robinson Beach, a ferry, public swimming baths, a substantial picnic area, a race course and the Brighton Hotel (which was on the current Novotel site). Because it was a huge success and so popular, the name was changed to Brighton-Le-Sands to avoid confusion with the English Brighton.

Brighton-Le-Sands is well known for its large Greek population and home to what Mark had promised me was the best souvlaki around.

Here is our itinerary:

All we needed to pack was our blanket, a tea-towel (in place of napkins, which I forgot) and a plate for serving (not essential, simply for nicer photos) and we were good to go.

Apart from being very popular at 4am on the way home from a night on the town, souvlaki (or souva) is one of those deliciously simple meals that has been around since ancient times. Seriously – excavations in Greece have unearthed firedogs, which are stone barbecues with receptions for skewers, that date back to the 17th century BC!

So with centuries to hone the souvlaki craft, you’d think it’d be perfected by now?

Correct – and one place that has done so is Souvlaki Bar, a no-frills but popular takeaway joint located on the busy, main strip of Brighton-Le-Sands.

There are sizzling spindles of meat rotating for the yeeros which may tempt you, but what you’re after is the deliciously warm, and custom-made souvlaki, which are cooked on a flat grill in front of you. There is a choice of chicken or lamb, and they toast the pita bread over the souvlaki, so that it infuses with the delicious smoky flavour from the cooked meat.

You can choose lettuce, tomato, onion and tabouli as well as a range of accompaniments including hummus and tzatziki. They also finish off each pita with a fresh squeeze of lemon, so that there is a tangy element to cut through the seasoning.

All your choices are laid out on your pita bread before being rolled up securely in greaseproof paper. Then out comes the skewer so that it is ready for eating. 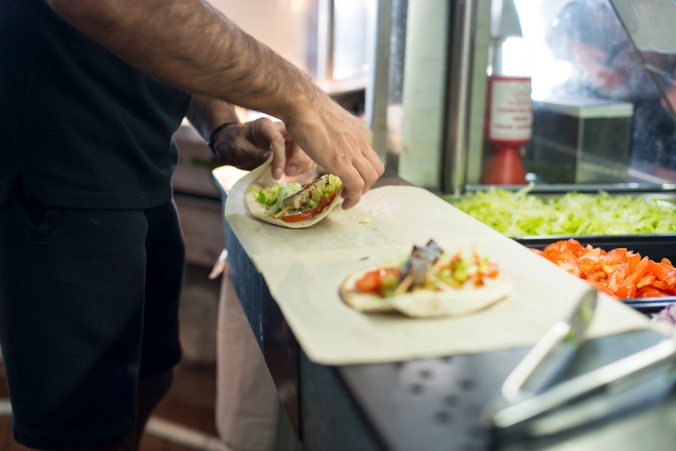 There is limited seating inside Souvlaki Bar and although it has some Greece-style artworks for “ambiance”, we suggest you do takeaway and head across the road, as it is conveniently located directly across from Brighton Beach. Hurry, so that you can enjoy while its hot!

The Grand Parade (opposite Souvlaki Bar)

Here is how we set up our picnic on the grass overlooking Brighton-Le-Sands Beach (or Brighton Beach – I need to confirm this with a local): 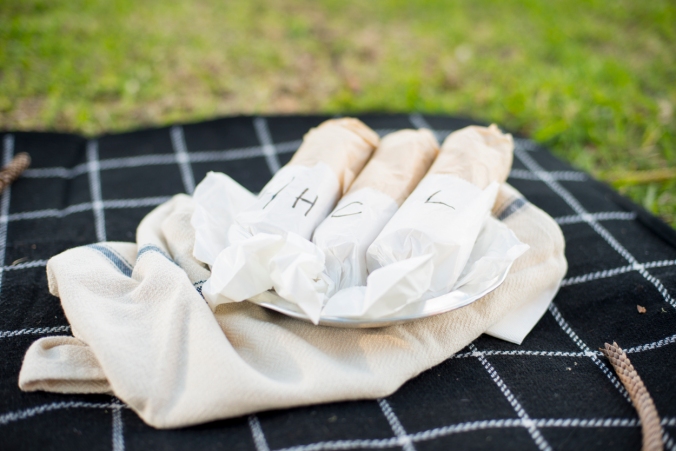 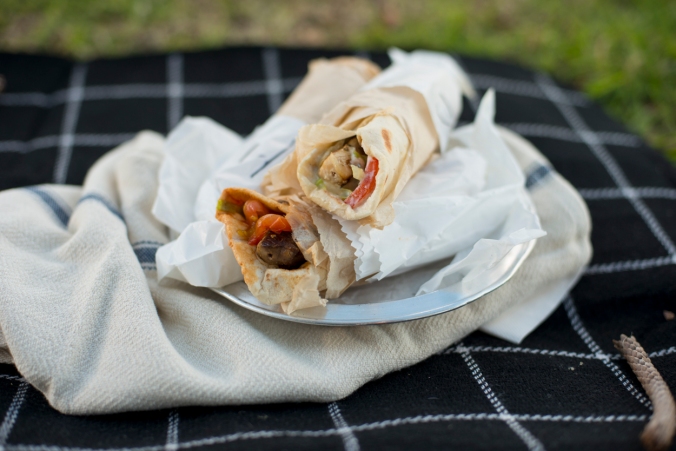 I recommend keeping the souvlaki roll in the bag to keep mess under control! Just tear off the paper as you go and tuck in.

Brighton Beach is not a traditional Sydney beach. It’s a little more industrialised as it looks out over Botany Bay and the Sydney Kingsford Smith Airport. But contrary to those with opinions on Sydney beaches, I don’t think this really makes it any less pretty or fun. In fact, I think it makes it more interesting.

There’s also something quite charming about the Brighton-Le-Sands area. It could be to do with the surrounding 1960s / 1970s apartment complexes which somehow, give me a bit of deja vu and an impression of a simpler time (albeit, a time before I was born, but one I can relate to).

And even though its located on a main and busy strip, the beach area manages to be quiet and peaceful with perfect spots for a picnic amongst the surrounding pine trees. 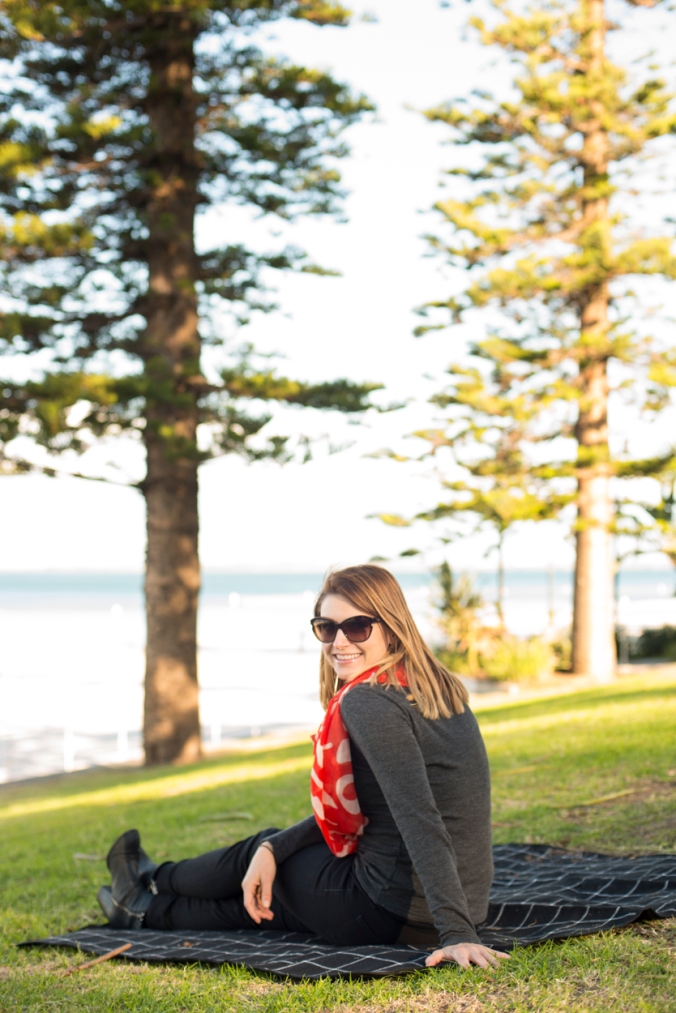 We sat and watched the planes come and go which was quite meditative. We imagined what all the people would be doing inside and where they were going and coming from. Apparently plane spotting is a thing, so if you’re a plane spotter, tee it up with a souvlaki picnic here.

After whiling away the afternoon, I got the idea that being a Greek area, there would probably be some good baklava around. Baklava, if I haven’t mentioned, is one of my favourite desserts. I know I talk a lot about favourites, but so you understand the scale, I would say I like baklava better than ice-cream. Which is a huge call. So without knowing where we were going, we ended up finding baklava and something better!

→  Dogs: √ – we had some friendly beagles come up for a pat (they smelled souvlaki).

→  Parking: √ – we parked in a side street – the actual road is busy so you may have to do some driving around the back streets. You may be able to get parking in Bayside Plaza.

→  Walking: √ – there is a board walk and we spotted lots of walkers and runners – may have to come back for a run!

COFFEE AND A LITTLE SOMETHING SWEET:

If you studied Greek mythology in high school, you may have come across the story of Tantalus, son of Zeus who was a bit of a glutton. It’s said that Tantalus was invited for dinner with Zeus on Mount Olympus and enjoyed the god’s ambrosia and nectar so much that he stole some to take back and share with his friends, the mere mortals. This enraged Zeus who punished Tantalus by making him stand forever in a still pool of water up to his neck and over his head hung a branch laden with fruit that the wind wafted away whenever he tried to grasp them. And this is where the word “tantalise” comes from.

So there’s a slight possibility that I may be facing some risk of punishment with the Greek secret I am about to disclose (and if you’re Greek, I can’t see this being a secret, so forgive my ignorance).

After searching for baklava and almost giving up, we discovered something else – loukoumades.

Loukoumades (pronounced “loo-koo-MAH-thess”) is a pastry made of deep fried dough soaked in a sugar / honey syrup and sprinkled with nuts and which tastes like love and happiness.

I’m sure these delicious donut-y puffs are old news to some lucky people who grew up with a yia-yia who made these, but it was my first experience and needless to say, I was blown away.

Here they are, along with baklava which we purchased from Mezes, a waterfront Greek restaurant which happily provided extra large serves to go, along with takeaway Lavazza coffee.

And here’s a close up if you’re not yet salivating:

Loukoumades also have quite an interesting history. In the ancient Olympic Games, one of the prizes awarded to victorious athletes was “honey tokens” – fried balls of dough covered in honey – and this is considered to be the earliest mention of any kind of pastry in European literature. They are best eaten hot and while still crispy and we enjoyed ours together with the baklava and our coffee. You can thank us later 😉 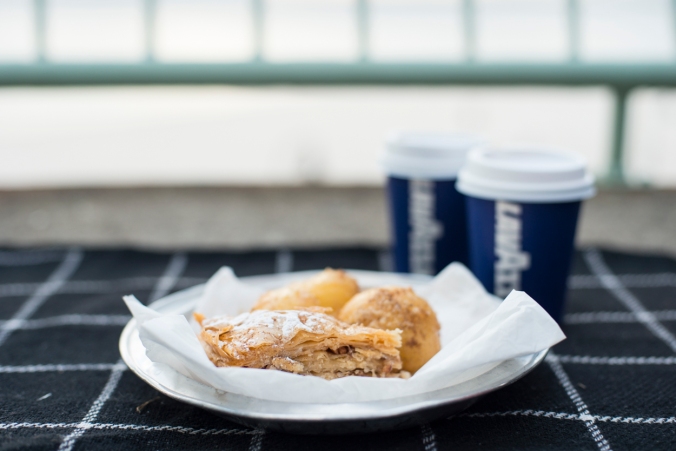 Maybe you noticed, maybe you didn’t, but we’re a little behind schedule on this blog post.

It’s because WE GOT ENGAGED!

Mark surprised me with a proposal on a beautiful Sunday morning during our “ritual” at the place that kicked off The Picnic Press and that will now forever be “our” place – Paddington Reservoir. It’s been such a wonderful wave of excitement and happiness and, to top it off, we are now down to a single-digit countdown for our holiday!

We intend to keep reporting back via The Picnic Press from picnic locations in Rome, the Amalfi Coast, Croatia, Prague, Vienna and Berlin and anywhere else in between. Although we have the best intentions to keep The Picnic Press regularly updated, it will be silly of us to guarantee any real consistency as there is a strong likelihood that we may get carried away exploring and having fun. But we do promise to keep our Facebook page and Instagram account (@thepicnicpress) regularly updated with photos so you can check out where we’ve been!

Arrivederci friends! We look forward to seeing you in Europe! 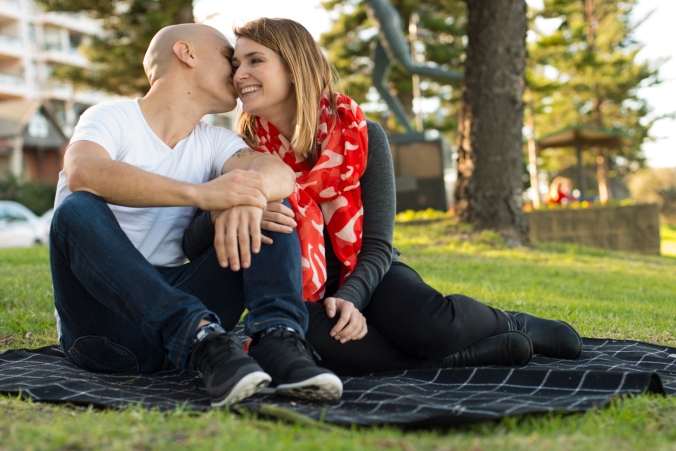 P.S If you love Mark’s photos, check out his other work at Mark Jay Photography and on Facebook.